I don’t have time to say anything terribly considered or even very interesting, but I just place this marker down that the workloads for all of us are not reducing (judges, lawyers, social workers, court staff…), and things are really tough out there.

9am hearings, lunchtime hearings, 4pm or even 4.30pm hearings – even in non urgent cases – are becoming normalised in the family court. This should not be happening. I challenge it when I can – for my own sake and that of colleagues – but our commitment to our clients and our cases sometimes makes this a hard line to hold. I do not pretend that I have not agreed on occasion, in particular cases. I’m not a militant or a purist, but I am really worried.

I know judges only started doing this out of necessity themselves, but I can feel us sliding ever faster down a very slippery slope, and my digging my heels in is no longer enough to counter the momentum that has begun to gather. 8am starts, 6pm finishes even on a non-trial day – and hours and hours of prep before and after. How did we get to this? When are we supposed to eat, sleep and breathe? When are we supposed to percolate? I need percolation time to be my best barristery self, to brew those eureka moments.

Once again, I hope and pray that someone up there (senior person not heavenly being) will find a way to make it stop. Not just for the sake of the lawyers, but for the judges too. They are not imposing such listings for fun, but the once unthinkable has very quickly become normalised. And they will all be burnt out too, if we aren’t careful. As if ‘lack of availability of judges’ is not a big enough problem already…At a time when we are standing out care final hearings for want of a judge and some parts of the country are taking half a year to get a Cafcass report working longer hours is not actually the solution it might seem to be.

Not long ago when I protested in a meeting about the idea of early or late listing, a colleague helpfully countered by saying ‘Well I do what is necessary to protect the needs of my client’, the implication apparently being that anyone who doesn’t agree doesn’t give a sh*t. Solidarity is in short supply these days, but we have to have each other’s backs. We must politely resist when we can  to protect ourselves, our colleagues (especially the more junior, who may often have care responsibilities for little ones) and to protect the integrity of the system – for the benefit of all our clients. It’s not selfish. It’s essential.

As we say here at familoo towers every morning before school : Have fun, work hard, try your best, be kind. But don’t give in to extended operating hours by stealth. (ok, we don’t say that last bit, but you get my drift) 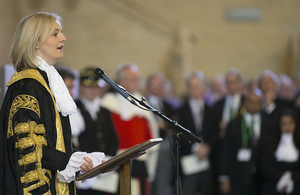 The Lord Chancellor, Liz Truss will today announce a radical new scheme designed to ensure that criminal sentencing is tougher and more effective. The move is rumoured to be the brainchild of Tory MP Philip Davies, who has previously called for measures to ensure that judicial leniency is stamped out. It will be implemented through an amendment to the Prisons & Courts Bill, which is currently under consideration in Parliament.

“It should be clear to many that where a judge consistently allows offenders to avoid prison and those offenders go on to make others suffer as a result of their continuing crime spree, there should be accountability for the judge…And there should really be consequences for that judge as well. In particular, where they don’t hand down custodial sentences which would be perfectly justifiable and possibly even expected, and particularly when the offender goes on to reoffend.”

Under the so-called Cell-based judicial Rehabilitation Administrative Penalty scheme, judges who deliver sentences which are later increased via the existing unduly lenient sentencing procedures, will be required to serve a sentence themselves equivalent to the difference between the original and the enhanced sentence – although for judges of good character this will be suspended in the first instance. Judges who fail repeatedly to adhere to the sentencing guidelines will also feel the impact upon retirement. Draft secondary legislation seen by this site states that “the daily cost of judicial accommodation and subsistence during periods of incentivisation will be deducted pound for pound from the capital value of the offender’s judicial pension fund“.

The scheme will be rolled out in parallel with the digitalisation of prisons and courts and a pilot of late night court sittings. A spokesperson from the Ministry of Justice said that

“the rollout of digital justice will mean that judges will be able to continue carrying out their judicial functions whilst detained, their cells operating as pop up courts. It is important that all categories of prisoners are gainfully employed whilst incarcerated, in order that disruption can be minimised and rehabilitation maximised and this will both enhance judicial efficiency and assist with the rehabilitation of other offenders through the modelling of good behaviour and respect for the rule of law.”

Asked whether or not this scheme had negative implications for the independence of the judiciary or the justice system more widely, a spokesperson said that judges would be able to access the support of McKenzie friends to assist in the preparation of their defences, and with getting the videolink to work.

Judges have privately condemned the scheme, which they complain would deprive them of their right to a private judicial privy. However, they may be buoyed by news that the digital justice reforms do not look likely to render them redundant just yet, as confirmed by lawbot entrepreneur and HMCTS consultant Joshua Browder :

“The law involves a lot of compassion. For example, [when deciding] whether someone should be granted bail. I think it is difficult for a bot to replace that. The legal system requires humans; technology isn’t allowed to argue in court.”

Asked about possible plans to replace judges with judgebots, a Ministry of Justice spokesbot said

“The Ministry remain committed to the utilisation of human resources, and are piloting a range of measures designed to maximise the efficiency of humanoid analogue forms of decision making. For example, drawing from studies showing that judges who have too much sleep tend to sentence more leniently*, we are experimenting with late night court opening as a way of nudging our judicial resource towards more appropriate sentencing practices.”

*see one such study here.

According to The Gazette, late night court opening is being piloted in

The Criminal Bar Association has raised concerns that the pilot scheme is likely to create a sentencing postcode lottery.

Thanks to my 8 y/o for showing me this winning entry into the Radio 2 500 words short story competition. It is even more chilling than the one read out by Julie Walters (which is about a piglet who is so horrified to find his relatives made into chops n sausages, that he licks a butcher to death and turns him into cuts of human meat)…Anyway, Ned’s story e-courtroom.com is somewhat more topical than a piglet story : I predict that Ned will one day be Lord Chancellor…