This review is a guest post written by  Sarah Phillimore, barrister at St John’s Chambers (@svphillimore), Bristol. Sarah joined St Johns Chambers in January 2011 from Coram Chambers in London. She has experience of all areas of family law and is training to become an accredited family mediator.

Helen Oakwater is the parent of three adopted children. She thus has immediate and practical experience of the difficult issues adoptive children can face overcoming the trauma of their early years and establishing healthy attachments to their adoptive parents. She is also well versed in the theory as (amongst other roles) a former member of the government’s Adoption and Permanence Task Force. 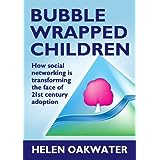 The ‘bubble wrapped’ children of the title refers to the traumatised adopted child who has tried to protect himself by a metaphorical wrapping of protective layers. The  adoptive parent must help to peel away these layers to allow the child to form healthy attachments to a new family.

The stated purpose of this book is to discuss and analyse the impact of unregulated and unexpected contact from birth families via social networking sites such as Facebook. Again, the author has direct and painful experience of this, her own children having received such communications just days before Christmas in 2009.

I discussed some of the issues around adoption and Facebook in an earlier guest post. I do not doubt that this is a serious issue which requires urgent engagement from all those who work in this field. However, I wonder whether attempting to present the book as one with a single issue focus is in fact doing it a disservice.

This is more than just an analysis of the particular impact of social networking sites. It has to be, because the implications of such ad hoc contact cannot be fully understood without some appreciation of how adoptive children might be different to those raised with uninterrupted and healthy attachments to their primary carers.

The book inevitably has to cover a very wide range of topics in order to allow the reader to fully understand the full potential for harm from such unexpected contact   to children already traumatised by earlier life experiences. The author sets out to  explain the likely nature and extent of trauma suffered by the adopted child and the ways in which the child can be helped to make sense of his or her world. She also puts herself in the shoes of the birth parents and considers how they might be thinking and feeling and how this can influence their actions.

The book is thus an excellent resource for those coming new to the system and who require an introduction to the psychological theories around attachment and trauma. The author is able to present a number of quite complicated concepts in direct and vivid language, making good use of metaphor and diagrams to aid understanding; I found illuminating the example of child development as a river. Some rivers flow smoothly to the sea, others are turbulent with additional murky tributaries. Which river would you rather navigate?

Thus, the book goes much wider than just the single issue of the ‘Facebook question’.  For me, its true core and most urgent call to action is found at page 111 where the author states:

‘Even though parents don’t have the professional expertise and knowledge of attachment and trauma trained therapists, they are, in the most part, expected to raise traumatised children without support or therapeutic in put from professionals’.

Indeed.  With an adoption disruption rate of about 25% we can’t afford to ignore this stark and sad reality.  I would recommend this book to anyone who needs an introduction to or refreshment of their understanding of the current psychological theories around trauma and attachment, be they lawyer, social worker or a potential adopters.

Most often experienced in family law in all its excruciating banality in the form of facebook mudslinging between exes, this post from Justin McShane reminds us that what we post online can be incriminating in oh so many ways. Be careful what you post. It may just come back to haunt you…Being tagged by a friend in a compromising photo could lead to you being tagged in an altogether more physical sense…

Thanks to @nickbilton for the RT of this story in The Telegraph about the number of online divorces citing facebook as a contributory factor. In fact the headline is ‘Facebook Fuelling Divorce Research Claims’ with a strapline of ‘Facebook is being cited in almost one in five of online divorce petitions, lawyers have claimed’.

I don’t doubt that as a general proposition facebook may be a feature of 1 in 5 online divorces. I do wonder though what support The Telegraph has for the reference in the title of the article to ‘Research’: When one reads the story it appears that in fact Divorce-Online have totted up the number of their own petitions which make reference to facebook and have come up with a figure of 1 in 5. I don’t doubt that figure, but I’m not sure it warrants a headline of ‘Research Claims’ by a national newspaper.

There appear to be three strands to what is claimed: 1 that facebook and similar sites make inappropriate relationships easier to conduct, 2 that they present a temptation to the spouse with a roving eye, and 3 that they are the means of a spouse finding out about infidelity and subsequently a source of evidence used to prove that infidelity. Of course what Mark Keenan quite properly says is that one in five of his cases ‘make reference to facebook’ – not that one in five cases are ‘fuelled by’ facebook: contrary to the headline there is no claim (let alone research) that one in five divorces are fuelled by facebook at all.

And on a more philosophical level – how many of those divorces can we really blame on facebook? One might reasonably suggest that rather than treating these statistics at face(book) value we need to look deeper and consider whether or not these so called facebook divorces are simply the way in in which an already failing relationship has come to end: spouses stray and spy on one another because their relationship is already damaged, has one some basic level stopped functioning. If  facebook weren’t around to blame how many of these divorces would have happened in any event?